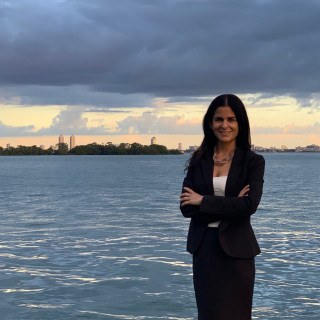 Serving South Florida in State and Federal Matters.
Review This Lawyer
Compare Save
Client Reviews
Reviewed by Galina Richards October 13, 2019
Ms. Anna C. Fernandez is an outstanding attorney, hard-working, dedicated, knowledgeble,and kind.
I was very lucky to be hiring Ms. Fernandez to represent me in a very complicated case against my outlaw Condo Board. Contrary to her petite & gentle looks, she is extremely tough, hardworking, and unstoppable, and at the same time kind, fare and compassionate! I would recommend Anna to everybody, who is looking for a top notch bright, honest and fearless Attorney, who will give it her absolute best in bringing any case to a successful conclusion.
View More ›
Read All Client Reviews
Badges
Claimed Lawyer ProfileOffers Video ConferencingSocial Media
Biography

Legal Lotus, P.A. was founded by third-generation attorney, Anna Fernandez. Ms. Fernandez, a Miami-native, graduated from La Salle High School and received her Bachelor's degree in Psychology from Florida International University in 2007. Ms. Fernandez graduated from St. Thomas University School of Law and is admitted to practice in all Florida State Courts and the United States District Court for the Southern District of Florida.

At St. Thomas University School of Law, Ms. Fernandez was a member and competitor of the State Championship Trial Team, an Executive Board member for the Public Interest Law Students' Association, and a member of the Cuban American Student Bar Association.

Prior to founding the Firm, Anna Fernandez worked with her father and mentor, Luis Fernandez, heading his firm's Civil and Family divisions, where she gained courtroom experience and exposure in several complex legal areas including contested divorces and children issues such as relocation and child support, breach of contract matters, and election law disputes. Ms. Fernandez credits her strong work discipline, and moral and ethical values to her father.

Business Educational Assistance of Tomorrow (BEAT)
Board Member
2016 - Current
Activities: The purpose of BEAT is to assist the adolescence, adult and the elderly person, including indigent minorities, to develop their potential by aiding in scholastic training, education and promotion of special production and classes, with emphasis on immigration causes, legal issues, financial consulting and homeownership assistance.

Florida Association of Women Lawyers (FAWL)
Member
2011 - Current
Activities: FAWL's Mission is to actively promote gender equality and the leadership roles of FAWL’s members in the legal profession, judiciary and community at large.

Dividing the home in a Florida Divorce

Florida Divorce Attorney Anna Fernandez and Real Estate Broker Marilyn Escobar, explain the issues surrounding a divorce with a marital home. This is a Q&A informational video that briefly covers the following concerns regarding certain rights of a Marital Home subject to divorce proceedings in Florida: 1. When is the Home considered a Marital Asset? 2. Who can claim equity in the Marital Home? 3. Does the Wife automatically keep the house? 4. Contract cancellation after closing. Visit www.abellarealestate.com for more information, or call (786) 584-7584. To contact Attorney Fernandez for a free consultation please email: AFernLaw@gmail.com.