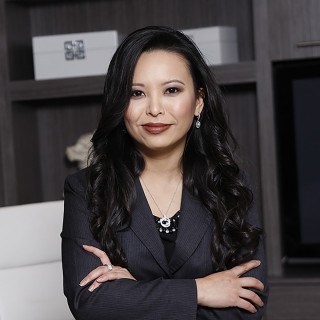 Sandy Van is a personal injury attorney licensed to practice in Nevada state and federal courts as well as Washington state courts. In 2012, she founded Van Law Firm, a personal injury and mass tort firm. In the years since its inception, the firm has expanded to two locations and a combined staff of over 100. Currently, Ms. Van focuses her practice on auto accidents, slip and falls, premises liability and other personal injury matters.

The growth and development of both Van Law Firm and Ms.Van’s personal career have not gone unnoticed. Nevada Business Magazine named her one of the state’s Legal Elite three times from 2013 to 2016, and she was awarded a spot on The National Trial Lawyers’ Top 100 list of 2019. That same year, Van Law Firm was featured on Inc. Magazine’s “Top 5000 Fastest-Growing Companies in America,” and the entire staff was recently recognized as the Best Personal Injury Attorneys in Las Vegas by Expertise.com.

Ms. Van started her career by handling cases in District Court for various local firms. These included civil and business litigation, real estate matters, deficiency issues, contract disputes, and collection matters. She previously earned two degrees from the University of Nevada, Las Vegas--a bachelor’s in finance and a Juris Doctor from the William S. Boyd School of Law. While in school and immediately afterward, Ms. Van clerked for the Honorable Judges David Barker and Nancy Saitta, formerly of the Eighth Judicial District Court of Nevada and the Nevada Supreme Court, respectively.

Above all, Ms. Van and the entire VLF team believe strongly in giving back to the communities in which they serve. Over the years, she has donated thousands of dollars in supplies for Clark County students and teachers, as well as meal donations through Three Square. Ms. Van also spends countless hours each year mentoring young attorneys about how to start and build a successful practice.

Nevada
State Bar of Nevada
Since 2007

Van Law Firm is a Las Vegas Personal Injury Law Firm that represents individuals in mass tort cases, those who are injured in an auto accident, and company premises such as slip and falls. Call today for a free consultation to see what your case is worth (725) 900-9000 Las Vegas, Nevada or (360) 200-0000 Lakewood, Washington.