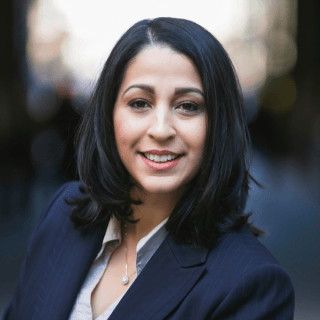 I trust Maria with every client I've sent her way, and she has come through every time. Simply stated, I would not want another disability lawyer to represent myself, my family, or my former clients.
Read All Lawyer Reviews
Client Reviews
Reviewed by Laura C. April 21, 2022
Absolutely amazing attorney!!
Maria took my case when I could not find anyone to help me. Luckily one of the attorneys I cold called referred me to her. She was a pleasure to work with and fought hard to get me compensated. She was easy to talk to, understanding and compassionate. I cannot recommend her highly enough.
View More ›
Read All Client Reviews
Badges
Claimed Lawyer ProfileOffers Video ConferencingQ&ASocial Media
Biography

Maria Bermudez is an attorney and legal consultant assisting disabled individuals nationwide, including the U.S. territories.  She focuses her practice on disability advocacy in the areas of Social Security disability and Long-Term disability under private policies.

Over the last fourteen years, she has held positions with the federal government, an international defense firm, plaintiff's firm and currently operates her own practice - Law Office of Maria E. Bermudez, LLC doing business as Disability Advocacy Group. Before practicing law, she served as a law clerk in the Family Division of the Superior Court of New Jersey. Ms. Bermudez has spent considerable time volunteering for community outreach programs, as well as writing for a number of publications including the American Bar Association’s Law Practice Today and The Legal Intelligencer.

Ms. Bermudez served as the Philadelphia Bar Association's 2017 Chair of the Government and Public Service Lawyers Committee; 2015 Chair of the Young Lawyers Division and Co-Chair of the Social Security Disability Committee. She is on the Board of the Hispanic Bar Association of Pennsylvania and previously served as the secretary on the Board of Directors for Friends of Farmworkers. In 2015, she was selected as a Diverse Attorney of the Year by the The Legal Intelligencer and in 2013, she was selected as a Lawyer on the Fast Track by The Legal Intelligencer. She's a current member of the National Organization of Social Security Claimant Representatives.

In 2007, Ms. Bermudez earned her law degree from Delaware Law School. She earned her bachelor’s degree in Sociology from Rosemont College in 2003. Ms. Bermudez is licensed to practice in all Federal courts in Pennsylvania and New Jersey and the Third Circuit Court of Appeals. She is NJ State Certified Bilingual Spanish/English.

Diverse Attorneys of the Year
Hispanic Bar Association of Pennsylvania
2015

Q. How can I get my money from my SSA attorney that owes the overage from the SSA amount held back to pay them?
January 5, 2022
A: Many times Social Security is waiting for something specific and just hasn't received it. A year is a very long long time for you to be waiting so you'll want to find out directly from SSA what they need. Your best bet in this situation is to contact Social Security directly. You can find the number to your local office on this website by putting in your zip code: https://secure.ssa.gov/ICON/main.jsp

Q. Can I get SSDI if my Narcolepsy is bad enough? I fall asleep standing, driving, sitting, doing anything.
January 5, 2022
A: Yes, you can get SSD if your narcolepsy is severe and prevents you from performing work functions. It's great that you are treating with a doctor and hopefully they are documenting the problems you are having with work. This will help your claim. Here's some info from SSA's website telling you how they evaluate this disorder: Although narcolepsy and epilepsy are not truly comparable illnesses, when evaluating medical severity, the closest listing to equate narcolepsy with is Listing 11.02, Epilepsy (https://www.ssa.gov/disability/professionals/bluebook/11.00-Neurological-Adult.htm#11_02). The severity of narcolepsy should be evaluated after a period of 3 months of prescribed treatment. It is not necessary to obtain an electroencephalogram (EEG) in narcolepsy cases. A routine EEG is usually normal, and when special attempts are made to obtain abnormal rapid eye movement (REM) sleep patterns, they may or may not be present even in true cases of narcolepsy. Also, narcolepsy is not usually treated with anticonvulsant medication, but is most frequently treated by the use of drugs such as stimulants and mood elevators for which there are no universal laboratory blood level determinations available. Finally, it is important to obtain from an ongoing treatment source a description of the medications used and the response to the medication, as well as an adequate description of the claimant's alleged narcoleptic attacks and any other secondary events such as cataplexy, hypnagogic hallucinations or sleep paralysis. https://secure.ssa.gov/poms.nsf/lnx/0424580005 Best of luck! - Maria