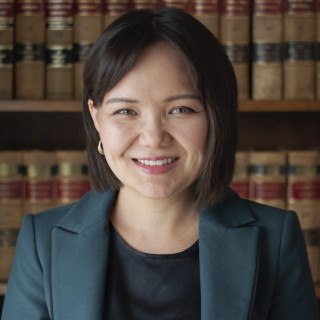 Aliya knew from an early age what she wanted to do with her life. Born in the former Soviet Union in what is now Kazakhstan, a large landlocked nation in Central Asia that gained its independence in 1991, Aliya's passion for law and justice led her to the legal profession. She attended Eurasian National University in Astana, the national capital and business epicenter of Kazakhstan, where she received a Law Degree in International Law. Upon graduation, Aliya traveled extensively and after concluding a trip to the United States, where she also acquired fluency in the English language, Aliya decided to further her education in the United States. Through a series of rigorous and highly competitive tests she became a prime candidate and eventual recipient of the prestigious Bolashak International Scholarship, awarded only to the best and brightest students in Kazakhstan. This accomplishment afforded Aliya the opportunity to earn her Masters of Law degree (L.L.M.) from University of California - Davis.

As an immigrant herself, Aliya has firsthand experience with immigration and truly understands the stress and frustration that comes with a process that can often be prolonged, circuitous and confusing. As the landscape of immigration law constantly changes with the passing of new legislation and the creation of new precedence through court rulings it is vital for an attorney to stay informed. In order to achieve the best results for the client, the proper procedures and guidelines must be closely followed. Aliya understands these unique challenges while also sympathizing with the struggles of immigrants and their families. It is with the utmost compassion and dedication that Aliya assists immigrants and non-US citizens as they navigate through the immigration process.