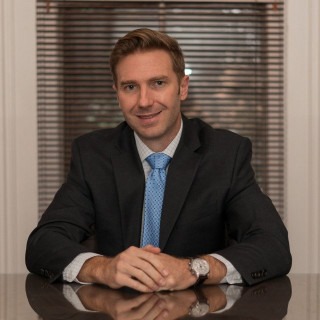 Matt was born in Ironton, Ohio and graduated from Dawson-Bryant High School in Coal Grove, Ohio. After graduation, he attended Miami University (Ohio) and received a Bachelor of Arts degree in German and Business. Matt received his Juris Doctor degree from Capital University Law School in Columbus, Ohio. While attending law school, Matt worked as a law clerk for a workers’ compensation firm in Columbus. Matt received his license to practice law from the Ohio Supreme Court in 2010. Immediately thereafter, Matt returned to Ironton in order to work with his father, David Spears.

Matt is a Cincinnati Reds and Cincinnati Bengals fan. He also enjoys and follows college football, college hockey, and Formula 1 racing. Matt stays active with jogging, skiing, backpacking and yardwork. His hobbies also include target shooting and cars. Whenever possible, Matt and his wife love to travel. Matt spends all of his downtime with his wife, son, and dogs.

Ohio
Supreme Court of Ohio Office of Attorney Services
Since 2010