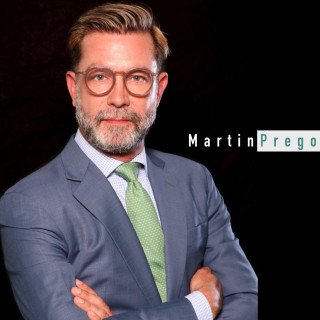 Martin George Prego was born and raised in Buenos Aires, Argentina. He graduated with honors in 1997 with a dual bachelor's degree in Political Science and International Relations from Universidad Del Salvador ("USAL") in Buenos Aires, Argentina. Martin was awarded two semesters at the University of Miami under the International Exchange Program, where he took undergraduate and graduate courses in international business. In 2018, Martin received a Juris Doctor from Mitchell Hamline School of Law in St. Paul, Minnesota. Martin received a certificate from Mitchell Hamline Alternative Dispute Resolution Institute in Advocacy and Problem Solving.
Martin started his career at Merrill Lynch in 1997, where he held several positions, including bank operations supervisor, banking officer, and compliance & risk management supervisor. In 2004 Martin joined Espírito Santo Bank in Miami, Florida where he served as Head of Compliance. In 2013, Martin joined Gibraltar Private Bank & Trust in Coral Gables as SVP of Compliance assisting the bank with its then OCC imposed Consent Order. In 2014 Martin joined Brickell Bank as Group Chief Compliance Officer. He was responsible for managing all aspects of the bank and its subsidiaries' compliance programs. During his tenure, Martin led the resolution of regulatory orders from various regulators, implemented and managed risk-based AML/BSA/OFAC & regulatory compliance programs.
Martin Prego has extensive experience assisting banks, broker-dealers, and investment advisors in a broad range of issues, including regulatory matters, resolution of regulatory enforcement actions, merger and acquisitions, regulatory examinations, and legal matters. Martin has fostered a solid reputation with state and federal regulators such as FDIC, OCC, SEC, FINRA, and the State of Florida.

Q. My husband was refused service because he was rowdy with a store employee. Can that employee refuse to serve me
10 September 2020
A: Notwithstanding I am basing my response solely on your post, in general terms, any business does reserve the right to refuse service. However, a business cannot break the law or discriminate on the basis of suspect and quasi-suspect classifications such as race, gender, etc. I will be more than happy to discuss your matter further if in Florida. You can contact my office by filling a form on my website: https://www.pregolawgroup.com

Q. Does 607.0102 require participation by all owners or can the majority owner act on this?
9 September 2020
A: Depending on the type of corporation, if a decision needs to be made, either a Special Shareholders meeting could be called or BOard of Directors (subject to the authority given to the Board). Also, in lieu of a meeting, a circular to ALL shareholders could be an alternative. In order to properly answer this matter, the articles, by-laws, and other corporate documents will be needed. I will be happy to assist you further. Please kindly visit my website to schedule a consultation: https://www.pregolawgroup.com

Q. If you have a joint bank account with someone and I received a refund from the IRS directly deposited in the account
4 September 2020
A: It will depend on the type of joint account, the terms of the bank account, and other considerations. I will be happy to give you a free assessment should you contact my office: www.pregolawgroup.com Sincerely, Martin Prego, Esq.