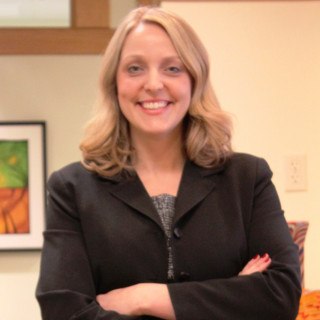 Kylie is a South Dakota native. She graduated from Drake University School of Business in 2002 and from the University of South Dakota School of Law in 2008. After serving as a Judicial Law Clerk for South Dakota's Fourth Judicial Circuit, Kylie began practicing as a divorce attorney at Viken Law Firm and then joined with Linda Lea M. Viken to form Viken & Riggins Law Firm. Kylie is now a family law attorney at Riggins Family Law, Prof. L.L.C.

She focuses her practice exclusively in the area of Domestic Relations Law and has established herself as a tenacious advocate who will work tirelessly to obtain the best possible results for her clients.

Kylie is admitted to practice in all South Dakota State Courts, Federal Court for the District of South Dakota and the United States Court of Appeals for the 8th Circuit. Kylie is a member of both the American Bar Association and the South Dakota Bar Association. She serves on the Family Law Committee for both organizations.

Kylie is a Past President of the Pennington County Bar Association and was formerly the Seventh Circuit's liaison to the Young Lawyers Board of the South Dakota State Bar.

Kylie has served as a guest lecturer educating other attorneys and community organizations on a variety of family law topics and is a graduate of the American Bar Associations Family Law Trial Advocacy Institute.

Kylie is most proud of her roles as a wife to her husband, Quentin and mother of her two active little boys. She is involved in the Rapid City community taking on leadership roles in the Zonta Club of the Black Hills where she is a former club Presdent, the Seventh Circuit CASA Program where she serves as the Vice Chair of the Board of Directors, and serving on the Youth & Family Services Head Start Policy Counsel. In 2017, Kylie was appointed by Governor Daugaard to serve on the Visitation Grant Advisory Group.