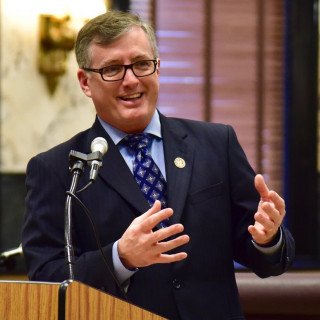 Jay is the founding partner of Hughes Brown, PLLC. He was raised in South Louisiana, and then served as an enlisted soldier in the U. S. Army and graduated from Nicholls State University in Thibodaux, Louisiana. He moved to Oxford in 1988 to attend law school and fell in love with Oxford, Ole Miss, and a girl from Natchez. He earned his law degree from the University of Mississippi School of Law in 1991, with a semester spent at Downing College, Cambridge University, Cambridge, England. He married his college sweetheart, Cris, and they proudly continue to call Oxford “home.”

Jay is admitted to practice before the United States Supreme Court, the Fifth and Tenth Circuit Courts of Appeal, and the State and United States District Courts in the States of Mississippi, Texas, Louisiana, and New Mexico. He has taught continuing legal education on the topics of real estate and estate planning and is also a regular lecturer at the Trent Lott Leadership Institute. Though Jay has a history of complex litigation matters, his primary experience and practice centers around real estate closings, business and banking matters in North Mississippi.

Jay has been married for over 25 years and has one daughter, and a spoiled rescue dog named Sadie. He and his wife have been active in public education and they were jointly awarded Citizen of the Year for 2012 by the Oxford School District. He has also served on the Board of the Whirlpool Foundation Sons & Daughters Scholarship, as well as being a former Alderman in Oxford, and a member of the Mississippi House of Representatives.