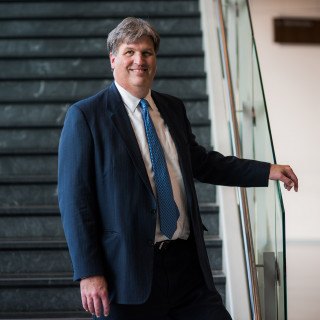 Edward L. Bleynat, Jr. began his legal career by clerking for James G. Exum, Jr., then the Chief Justice of the Supreme Court of North Carolina. He later went to work with a major Greensboro law firm in a general litigation practice, focusing on business litigation and tort law.

In 1995, Ed, his wife and children relocated to Asheville, North Carolina to continue his law practice and to raise their family in Western North Carolina, where Ed grew up. After Ed started his own firm in 1997, he and Joe Ferikes merged their practices into Ferikes & Bleynat, PLLC in 2001.

Ed is actively involved in a variety of church, civic and community activities as a director, a trustee or a volunteer. He is an AV Preeminent Peer Reviewed Lawyer by Martindale Hubbell.