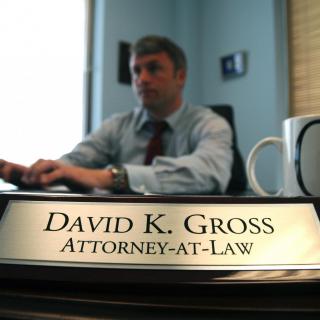 David Gross graduated from Lakeview High School in St. Clair Shores, Michigan in 1992 where he was on the football and swimming team. David graduated Summa Cum Laude from Mount Olive College in Mount Olive, N.C. with a B.S. in Criminal Justice. David attended the University of North Carolina School of Law in Chapel Hill where he was a member of the International Law Journal. After serving in both the Air and Army National Guard, David became a Rocky Mount N.C. Police Officer in 1998. David Gross performed all aspects of law enforcement including writing traffic citations, D.W.I.’s, assaults, domestic violence investigations, murder and rape investigations, and narcotics violations. David was an integral member of the police department’s Narcotics Enforcement team that performed street-level vice enforcement as well as State and Federal narcotics investigations. David worked closely with agents from the Drug Enforcement Administration and State Bureau of Investigation on drug and firearms cases. While attending the UNC School of Law, David interned with the Onslow County District Attorney’s Office. David was responsible for handling more than forty trials during this internship. Upon graduation from law school, David moved to Wilmington, NC. David initially went to work for Ted J. Besen and Associates where he began his criminal law practice. David divided his time between the Wilmington and Jacksonville offices. David formed the Gross Law Group in 2011. David continues to practice Criminal Defense in New Hanover, Pender, and Onslow Counties. David puts his extensive legal and law enforcement experience to use every day in the defense of his clients. Let David put his knowledge and experience to work for you!