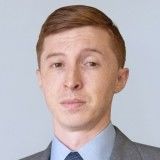 Mr. Trautmann found his passion to become an attorney after his grandmother passed away from an unfortunate personal injury accident. To this day this tragedy propels George to exhaust every means available in his pursuit to help every client recover the justice and settlement...

Immigration
University of Florida
Compare Save
Show Preview
View Website View Lawyer Profile Email Lawyer
Born in Gainesville, Florida, Evan D. George has over ten years experience in immigration law, including three years with a premier immigration firm in New York City, NY, Masliah & Soloway, PC. In February 2008, Mr. George started his own immigration law practice in Gainesville, Florida, where he represents individuals in all areas of immigration and deportation defense. Mr. George provides pro-bono legal services to indigent asylum seekers and battered migrant women. He is a member of the Florida Bar, is an active member of the American Immigration Lawyers Association (AILA) and has served as an adjunct...

Claimed Lawyer ProfileSocial Media
Alyson M George
Tampa, FL Lawyer with 14 years of experience
(813) 513-3218 2102 W. Cass St.
Suite 103
Tampa, FL 33606
Free ConsultationCriminal and Personal Injury
Stetson University College of Law
Compare Save
Show Preview
View Website View Lawyer Profile Email Lawyer
Ms. George began her career as a defense attorney, defending claims made against the largest automobile insurance carrier in Florida and its insureds. Although she gained invaluable experience and knowledge in that position, she quickly realized that she would be better suited fighting for the rights of those who are injured instead of defending a billion dollar insurance carrier. Armed with the knowledge of how insurance carriers evaluate and defend claims, Ms. George joined a prominent Clearwater personal injury firm as a litigation attorney handling various types of cases including: car accidents (including those involving DUI/punitive damages), slip/trip...

Claimed Lawyer ProfileSocial Media
Janet George
Seattle, WA Attorney with 46 years of experience
(206) 397-0399 1501 4th Avenue, Suite 1750
Seattle, WA 9811
Divorce and Family
University of Puget Sound
Compare Save
Show Preview
View Website View Lawyer Profile Email Lawyer
Janet George has been practicing family law for over 35 years and is widely recognized as one of the top family law attorneys in the state of Washington. She limits her practice to complex, high asset and high income cases, including those involving property characterization, business valuations, and the distribution of multi-million dollar estates. She has represented high net worth individuals across different fields, including business owners, corporate executives, legal and medical professionals, and professional athletes.

Janet has received the top honors of her field. She has been a Fellow of the American Academy of Matrimonial Lawyers (AAML) since 1992, serving...

Medical Malpractice, Personal Injury and Products Liability
University of Oklahoma College of Law
Compare Save
Show Preview
View Website View Lawyer Profile
Kelly A. George grew up intending to remain on his familyâs farm in southwestern Oklahoma and follow in his fatherâs and grandfatherâs footsteps. But when he went away to attend Oklahoma Christian University in the early 1980s because his parents insisted on him obtaining a college degree, the farming economy sharply declined and became much less appealing. So when he received his B.S. degree in American Studies in 1985, George opted for an alternative career path. He decided to become a lawyer instead of a farmer, attending Oklahoma City University Law School and the University of Oklahoma College of Law, receiving...

Claimed Lawyer Profile
Abe George
New York, NY Attorney with 16 years of experience
(212) 815-0400 80 Centre St
New York, NY 10013
Free Consultation
Compare Save
Show Preview
View Lawyer Profile
Abe George has been practicing law for over a decade. From law school Abe always had an interest in criminal law. While in law school Abe had interned in the Homicide Unit of the Queens District Attorney's office and the Special Prosecutions Bureau of the Manhattan D.A.'s Office.

Business, Construction, Medical Malpractice and Personal Injury
West Virginia University College of Law
Compare Save
Show Preview
View Website View Lawyer Profile
Madeline “Maddie” George joined Johnstone & Gabhart, LLP in August of 2013. In 2008, Maddie graduated from Rhodes College, where she received a Bachelor of Arts degree in political science. While at Rhodes, Maddie was a member of Delta Delta Delta Sorority and also a senior representative of the Panhellenic counsel. Following graduation from Rhodes College, Maddie moved to Washington, D.C. where she worked for a lobbying firm for two years. Maddie received her Juris Doctorate degree from the West Virginia University College of Law 2013. As an Associate at Johnstone & Gabhart, Maddie focuses...

Claimed Lawyer ProfileSocial Media
Ruth P George
Williamsville, NY Lawyer with 20 years of experience
(716) 982-1662 29 California Drive
Williamsville, NY 14221
Elder, Estate Planning, Probate and Real Estate
SUNY Buffalo Law School
Compare Save
Show Preview
View Lawyer Profile Email Lawyer
I really enjoy spending time with clients and taking a personal approach to assisting them. I grew up wanting to be a ballet dancer and spent most of my time in the ballet studio. I started a professional ballet career, but, ended it after a major injury requiring surgery. I have learned we all go through tough times and experiences and life certainly throws us curveballs. But, I find the journey we take and our continual growth is what is most important. Although I am no longer a ballet dancer, I feel the training I...