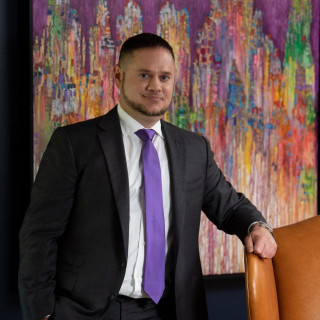 Robert J. Boughter, the founder of Boughter Sinak, LLC, dedicates his life to the representation of people seriously injured or killed in accidents and on the job. He is known as “The Fighter” because of his aggressive and straightforward approach to representing his clients in and out of court. Mr. Boughter prides himself on being honest, tenacious and loyal. He has a vast range of experience, having successfully prosecuted almost every type of injury or death case imaginable – from trucking accidents to chemical explosions. Mr. Boughter was born in New Castle, Pennsylvania. He received his undergraduate degrees in criminology and Spanish magna cum laude from Indiana University of Pennsylvania in 1997. Mr. Boughter also studied at the Universidad de Valladolid, Spain and El Centro Biling?ue in Cuernavaca, Morelos, Mexico. Mr. Boughter is fluent in Spanish. Following undergraduate school, Mr. Boughter served as a special agent with the Office of Inspector General-Commonwealth of Pennsylvania, where he investigated and prosecuted fraud in governmental agencies. Mr. Boughter had a 100% conviction rate for the cases he investigated.