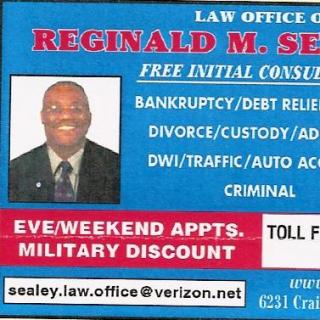 LCDR Reginald M. Sealey, USCG (Ret) Immediate Past President, Prince George’s County Chapter MOAA LCDR Sealey is born and raised in Augusta, Georgia. He is a 1974 NROTC graduate of The Citadel, The Military College of South Carolina, with a BA degree in History. He led a Cadet Platoon, played on the Basketball team, achieved the Dean’s List, won the Kelly Award while a cadet Sargent in H Company, and was a member of the 1974 Summerall Guards. He was first commissioned a second lieutenant United States Marine Corps and served on active duty as a communications officer from 1974 to 1979, earning a Master’s Degree in Business Administration from National University in 1978. He continued serving in the Marine Corps Reserve while attending The University of San Diego Law School where he graduated with a JD degree in 1982. LCDR Sealey served as a Deputy Public Defender in Honolulu, Hawaii in 1983. He received a direct commission as a JAG officer in the USCG Reserve in 1983, and later integrated into the Regular Coast Guard in 1990. After serving at various Coast Guard activities throughout the United States and graduation from the Naval War College in 1993, LCDR Sealey retired from active duty on 1 April 1998. He worked as a Contracts Representative at Northrop Grumman Corporation and presently serves Prince George’s County Maryland as a private attorney. He was married to Julette Ann Sealey (nee Hicks) of New Castle, Pennsylvania in 1975. They have two children, Amanda, a Prince George’s County school teacher and Reginald M. Sealey, II, an active duty Major, USMC. LCDR Sealey and Julette are the proud grandparents of two boys and counting.