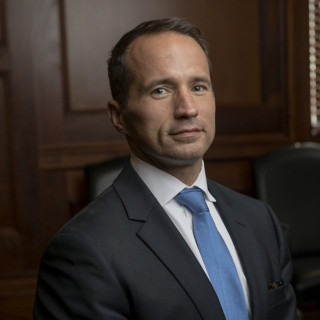 Nick, known formally as George Lawrence Rice, IV, is a third generation attorney following in the footsteps of his grandfather and father.

Mr. Rice graduated from The University of Tennessee with a Bachelor of Science in Psychology in 2000. He returned to Memphis to attend law school and continued working at the firm. Mr. Rice received his J.D. from the University of Memphis Cecil C. Humphreys School of Law in 2003.

Because of his extensive training, he practiced law immediately after passing the bar. Following in his father’s footsteps, he has also presented Continuing Legal Education lectures.

In 2010, Nick was named one of Cystic Fibrosis Foundation’s Memphis’ Finest Young Professionals. Nick is rated excellent on Avvo, an attorney rating website. Mr. Rice served on the Executive Council of the Family Law Section of the Tennessee Bar Association in 2010. In 2014 and 2015, Mr. Rice received one of America’s Most Honored Professionals Award.

In 2017 he received membership to the American Society of Legal Advocates, an invitation only legal organization comprised of the nation’s most skilled lawyers.

A New Approach to Divorce, Divorce Practice with Larry Rice
2019

How to Make More Time in a Day, Monthly Meeting
2019

A New Approach to Divorce, Divorce Practice with Larry Rice
2017

The Return of Divorce Practice, CLE
2006