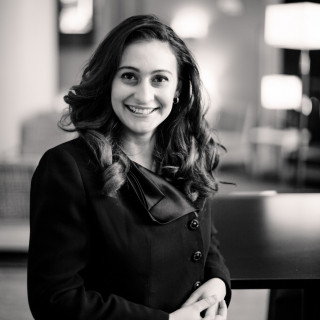 Nazly Mamedova practices the immigration law of the United States of America, (family, employment and asylum) and offers legal support to the immigrant communities of the Tri-State area, including counsel in juvenile and domestic relations matters. She speaks Russian, Ukrainian, Uzbek, Azerbaijani, Turkish, and Crimean Tatar languages. She is a dedicated advocate for and advisor to her clients, respecting personal, family and business relationships. Mrs. Mamedova's international experience includes advising both publicly and privately held and non-profit corporations, and assisting with mergers and acquisitions, business registrations, and tax matters. Mrs. Mamedova received her Juris Doctor degree from Salmon P. Chase College of Law of Northern Kentucky University and a Bachelors in International Affairs from Xavier University in Cincinnati where she was a Brueggeman fellow.
Mrs. Mamedova's is admitted to the Kentucky Supreme Court, to the United States District Court for Eastern Kentucky, the United States Court of Appeals for the Sixth Circuit and the Supreme Court of the United States. She may appear before the Board of Immigration Appeals, the U.S. immigration courts, and all U.S. immigration agencies. Mrs. Mamedova is a certified health care interpreter for the Russian language. She is a member of the American Immigration Lawyers Association, American Bar Association, and Cincinnati Mayor’s Immigration Task Force. She actively volunteers with the Red Cross of Greater Cincinnati and Give Back Cincinnati. She is a member of the Junior League of Cincinnati.

Attorney
Law Office of Nazly Mamedova
2019 - Current
We concentrate on immigration law only. We provide family, business, and removal & deportation services. We are here to serve our clients and to advise them on the issues they might be facing.