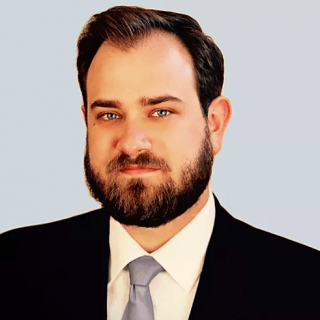 MILES DEVON SKEENS IV (JD, M.Ed) is a highly regarded litigator and lawyer with experience in both law and education. Upon graduation from Northern Kentucky University, Mr. Skeens was accepted into the prestigious Teach For America program, which places highly qualified educators in public school classrooms in underserved areas. Mr. Skeens taught high school government and history in Baltimore City Public Schools while earning his Masters of Science in Education from the top-ranked Johns Hopkins University. This experience endowed him with a passion for community-building, public service, and student rights.

Mr. Skeens graduated from the Brandeis School of Law at the University of Louisville, where he was a published member of Law Review, a recipient of the Greenbaum Fellowship for Public Service, and an advisor to the University's exploratory committee on charter school investment. Mr. Skeens was one of three law students selected from a nationwide search for the coveted Summer Associate position at the New York City Office of the Appellate Defender, where he represented indigent individuals in their appeals before the New York Supreme Court, Appellate Division. He was the only Summer Associate selected who did not attend an Ivy League law school, making him the only known Brandeis student to argue before the New York Supreme Court before even passing the bar. Mr. Skeens has lectured on such topics as student freedom of speech, building school safety through positive community support, and increasing public investment in rural Appalachia. His writings have been published by Bar Briefs Magazine, The Louisville Courier-Journal, and The Lexington Herald-Leader. He has been quoted for features on education by NPR and CNBC. Mr. Skeens is a founding partner at the law firm of Patton & Skeens, PLLC and lives in Louisville.