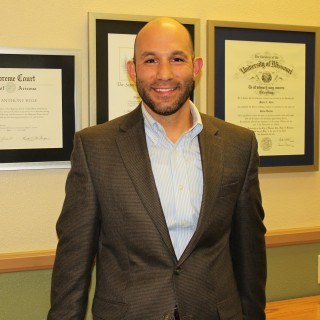 Mark owns and operates Mingus Mountain Law Group PLLC in beautiful Northern Arizona where he and his staff focus exclusively on representing victims of injury. He is experienced at all levels of litigation, including arbitration, mediation, trial, and appeals. Coming from a large family, Mark naturally treats each client like family, and is honored to serve those suffering from injury, relentlessly pursuing the compensation they deserve.

Mark believes in giving back to the community which has blessed him with employment opportunities. As a member of the Volunteer Attorney Program, he volunteers dozens of hours of his time per year providing legal guidance to those who are unable to afford an attorney. In 2008, Mark was the recipient of the 2007-2008 Yavapai County New Volunteer Attorney of the Year awarded by the Volunteer Attorney Program. In 2009, he was honored with the 2008-2009 Yavapai County Pro Bono Attorney of the Year award. He has served on the Board of Directors of the Prescott Habitat for Humanity, as well as Franklin Phonetic School. Mark and his family (all girls!) attend Lifepointe Church in Prescott Valley, Arizona and he is a Big Brother with Big Brothers Big Sisters as well a foster parent.