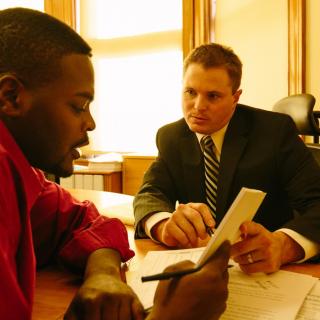 Louis J. Meyer, a partner with Meyer & Kiss, LLC, concentrates his practice in Civil Rights, Criminal Law, and Personal Injury. Mr. Meyer is also actively working with Medical Marijuana research and passage of legislation for Medical Marijuana. Prior to founding Meyer & Kiss, LLC Mr. Meyer was an associate with a Chicago law firm concentrating on Civil Rights. Mr. Meyer joined the Chicago law firm in November 2006, after graduating from DePaul University College of Law, Mr. Meyer was the first attorney to join the law firm and helped the firm grow its client base and reputation. During his first week as an attorney, Mr. Meyer worked on federal civil rights trial. The day Mr. Meyer was formally sworn in as an attorney, the jury handed down a $365,000 verdict for his client.

Born in Woodstock, Illinois, Mr. Meyer got his bachelor’s degree with Honors at the University of Iowa in 2001. For his Honors thesis, Mr. Meyer authored a psychological study on faulty eye-witness identifications in the criminal justice system. After graduating from Iowa, Mr. Meyer then moved to Chicago to attend law school at DePaul. Soon after starting law school, and based upon the results of his honors thesis, Mr. Meyer realized that he wanted to practice civil rights, criminal, and personal injury law because of his deep belief in helping people in our justice system. While at law school, Mr. Meyer continued his education into complex civil rights issues and injustices in the legal system.

Mr. Meyer has tried eighteen jury trials to verdict. In 2016, Mr. Meyer obtained a verdict of $1,500,000.00 for his client that was sexually assaulted while an inmate in the Illinois Department of Corrections. That same year, he was appointed to represent another inmate that accused prison officials of failing to protect him from his cellmate that attacked him and caused a cut lip and black eye. After a two day trial, Mr. Meyer obtained a verdict of $125,000.00.

Lodging in Collinsville (with Michael Reichert)

Public Service Announcement & Traveler Warning for anyone driving through Southern Illinois: While testifying under oath, Officer Michael Reichert admits to planting drugs or drug scents on cars in hotel...

Breakfast in Collinsville (with Michael Reichert)

CLICK SHOW MORE for news, sources for the video, and related links. After Collinsville was defeated in the Seventh Circuit Court of Appeals, This case settled in court for $100,000...