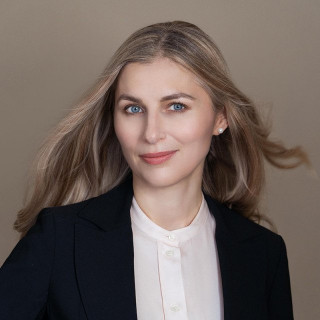 As the founder of Stelmakh & Associates, Katsiaryna Stelmakh has earned a strong reputation as an immigration attorney. She has successfully represented companies and individuals in business and family immigration matters as well as deportation defence. She also advises employers on I-9 compliance and employee international relocation.

Prior to founding Stelmakh Associates, Ms. Stelmakh managed business immigration practice of an international law firm with offices in Philadelphia, Moscow, Russia, and Kiev, Ukraine. While with the firm, she counseled one of the world's largest ferro-alloy and steel manufacturers on all international business personnel relocation matters and travel concerns. She also litigated international intellectual property and contractual business disputes and advised corporate clients on international business transactions. Among other matters, she represented one of the largest Ukrainian business groups in the London Court of International Arbitration in a more than $100 million contractual dispute involving shareholdings in Ukrainian energy companies.

Ms. Stelmakh also worked for the World Bank in Washington, DC, where she drafted loan and grant agreements with Russia and other CIS countries -- including an $80 million loan for the Russian Hydromet Modernization Project. In addition, while with the World Bank, she did research and drafting on matters of international armed conflict and refugee law and analyzed cases of the International Criminal Court, South-African Truth & Reconciliation Commission International Criminal Tribunals for the former Yugoslavia and Rwanda and other courts.

Inspired by her spirit of volunteerism and her own personal experience as an immigrant in the US who started with a student visa, Ms. Stelmakh launched her immigration law career as a volunteer for the Community Refugee and Immigration Services in Ohio where she advised Somali refugees on obtaining permanent residency and naturalization in the US.

Ms. Stelmakh is licensed in Ohio, New Jersey and Pennsylvania and is authorized to practice immigration law in any US state. She is currently a member of the American Immigration Lawyers Association (AILA) and is active in the American Business Association of Russian Professionals (AmBAR) and an international humanitarian organization Children International. Ms. Stelmakh is fluent in Russian, Belarusian and English and has a working knowledge of German and Ukrainian.

Pennsylvania
Disciplinary Board of the Supreme Court of Pennsylvania
ID Number: PA 202193
Since 2006

What visa do I need as a startup founder moving to the USA?
https://adviserly.io/
September 2, 2022

During the initial consultation, you will confidentially discuss your situation and the different options we can offer to solve your immigration needs. You will come out of the discussion with the action plan, an understanding of the next steps, and an estimate for our services.