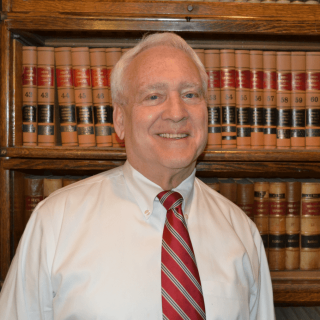 John primarily works in the areas of commercial and residential real estate. John has represented developers of planned unit developments, condominiums, and subdivision development, including initial due diligence, purchase documentation, zoning, building codes, restrictions, purchase agreements, and closings. The firm, as part of their relationship with Hartung Title, works daily analyzing and correcting title issues. In addition, John works with clients on estate planning, including wills and trusts, together with probate administration.

John has been happily married since 1976 to Cheryl Witker. They raised three children and have eight grandchildren. John attended Purdue University and graduated with a BS in Civil Engineering. After graduation, John went into the service. John spent two years in the US Army, including one year in Vietnam as a First Lieutenant. John worked for Owens Corning Fiberglass in many capacities in Toledo and Valparaiso, Indiana, during which time they started a new plant manufacturing fiberglass, underground, gasoline storage tanks for filling stations. John attended Valparaiso University Law School and entered the practice of law in 1975. Since 1975, John has been in private practice in Port Clinton, Ohio. John is also an equal owner of Hartung Title Agency, Inc., a title insurance agency.