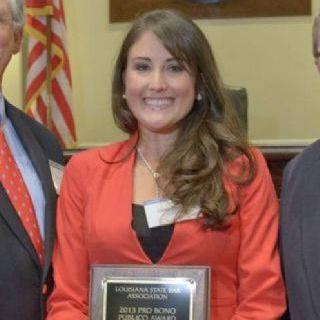 Jenny graduated from the Loyola University College of Law, and earned her undergraduate degree from Our Lady of Holy Cross College. Jenny began her bankruptcy practice in 2011 as the Law Office of Jenny Abshier. Jenny's office took great pride in providing options to reduce the upfront costs required for filing bankruptcy, as well as providing access to pro bono services when available. As Jenny's reputation grew, so did her practice. Jenny has partnered with two similar minded attorneys to form the Big Easy Law Group in order to further spread her beliefs in compassion and accessibility to even more people. Past clients have described Jenny's assistance in filing for bankruptcy as life-changing. She's been praised for her compassion and understanding, as well as her non-judgmental attitude. Jenny is honored to be the recipient of a 2012 Distinguished Service Award from the Pro Bono Project of New Orleans, as well as a 2013 Pro Bono Publico Award from the Louisiana State Bar Association. Both of these awards hang proudly in her office in recognition of her dedication to pro bono services. Jenny is admitted to the United States District Court for the Eastern District of Louisiana, the Bankruptcy Court for the Eastern District of Louisiana, and all Louisiana state courts. She is an active member of the National Association of Consumer Bankruptcy Attorneys (NACBA), the American Bankruptcy Institute, the and American Business Women's Association Crescent City Connections (ABWA). Like all lawyers, she is a member of the Louisiana State Bar Association. Jenny is also graduate of the Leadership Jefferson Class of 2012.

Things to Do Before Filing Bankruptcy
Avvo
July 29, 2015

Brief video I made for the Pro Bono Project discussing consumer issues during the COVID-19 crisis.