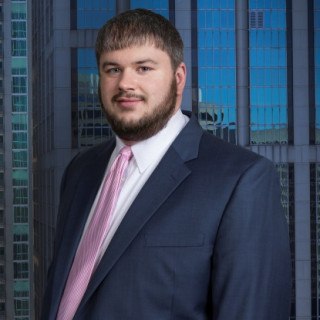 Jared’s practice is concentrated primarily in the areas of workers’ compensation, employment practices litigation, and trademark application and litigation. Jared has been honored as a recipient of the Mid-South Super Lawyers Rising Stars award in 2016 and 2017, a distinction given to no more than 2.5% of attorneys in Tennessee, for his workers’ compensation practice.

Jared was one of 35 attorneys from across the State who graduated from the Tennessee Bar Association’s Leadership Law Class of 2017. He serves in the Mid-South Workers’ Compensation Association, Memphis Chapter, and on various committees with the Memphis Bar Association, including the Publications Committee, the St. Jude Committee, and the Membership Committee.

He has volunteered for the Memphis Grizzlies Charitable Foundation, where he mentored middle school students at local charter schools, focusing on life skills such as leadership, team-building, personal responsibility and civic engagement. Jared became a St. Jude Hero for his involvement and fundraising for the 2016 St. Jude Marathon weekend. Away from the office, Jared enjoys spending time with his wife, Jeannie, their son Cooper Harris, playing basketball, and traveling.

Does Tennessee Need Another Tort? The Disappointed Heir in Tennessee and Tortious Interference with Expectancy of Inheritance or Gift, 77 Tenn. L. Rev. 385
2010