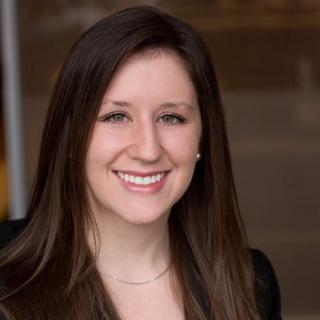 She joined Salvi, Schostok & Pritchard P.C. in 2013, where she has had the chance to do precisely that. Her practice encompasses a broad range of cases involving personal injury and she has been part of several significant outcomes on behalf of injured clients.

In 2016, she was on a Salvi legal team that won a $1.6-million jury verdict for the family of a mentally disabled woman who lived in a group home. Despite a series of falls and other medical issues, the woman was left alone and suffered two serious falls leading to her death from a severe brain bleed. In that trial, Ms. Olszewski examined seven witnesses who provided testimony to assist the jury in determining its verdict.

Additionally, in 2016, Ms. Olszewski tried a case in Will County that resulted in a $6.6 million default judgment on behalf of a client who suffered severe injuries in a hit-and-run accident. During the proceeding, Ms. Olszewski called on several experts who testified to her client’s injuries and damages.

In addition, she was a member of a legal team that obtained an $18.5-million settlement in early 2017 on behalf of a child who suffered a serious brain injury due to a delay in the diagnosis and treatment of meningitis.

Ms. Olszewski is active in several professional organizations and has made presentations about her trial experience at Salvi, Schostok & Pritchard P.C. In 2017 and 2018, she was named as a Rising Star by Illinois SuperLawyers.