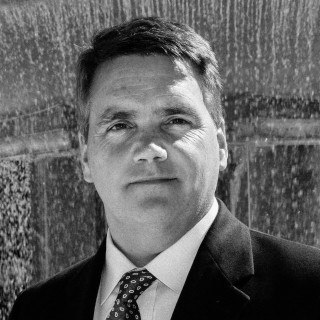 Dave landed in Hampton Roads as his last stop in the Air Force. Having begun his stint in the military with the ultimate goal of attending college and law school, his arrival in Virginia could not have been more fortunate because of its many fine colleges and universities. Upon leaving the Air Force, Dave bartended at various establishments on the Peninsula while attending Christopher Newport University and then the College of William and Mary, from which he graduated with a BA in philosophy and economics in 1990. He went on to law school at Washington and Lee University, where he was selected as a member of the Law Review before graduating in 1994.

Dave worked with two small civil litigation firms in Virginia Beach before moving on to a midsize law firm in Norfolk in 2001, where he became a partner and remained for 16 years. In that position, Dave represented a broad range of clients, including medical practices, surgeons, psychiatrists, product manufacturers, retailers, and individuals as both plaintiffs and defendants in civil cases. Much of his practice involved advising insurance companies on the evaluation and handling of injury cases of various kinds. Throughout his career, Dave has frequently handled cases through conclusion at trial in state and federal courts, and as of mid-2017, has tried over one hundred and fifty jury trials.

Dave is a long-standing member of the I’Anson Hoffman Inn of Court and the Norfolk/Portsmouth and Virginia Beach Bar Associations. He has served as a volunteer with the CLASS program in Virginia Beach, assisting battered and abused spouses in obtaining protective orders. Dave has taught trial practice to younger attorneys at trial practice seminars. He has presented lectures to attorneys in Virginia for the Virginia State Bar and other organizations on trial practice issues such as the use of expert witnesses, strategies for opening statements and closing arguments, the law of damages in wrongful death cases, and other topics.

Blog
Do You Know Your Local Bicycle Laws?