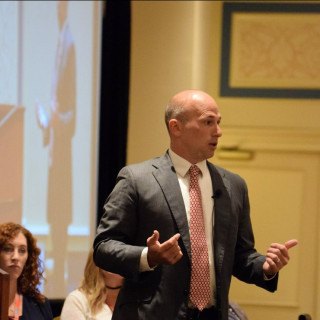 Daniel Sabol is one of Ohio’s most recognized and skilled criminal defense attorneys. His talent has been acknowledged by many Ohio and National organizations, including America’s Best Lawyers, Super Lawyers, Columbus CEO, and Columbus Business First. Dan is a regular speaker at seminars across the country, and his expertise is often sought by other defense attorneys, prosecutors, judges, and officers.

Dan has engaged in extensive training to give him an edge in the courtroom. He completed several courses of forensic science in a laboratory, which culminated in a designation of “lawyer scientist” by the American Chemical Society. Further, Dan became the first private attorney in Ohio to be accepted into the National Forensics College, which covered a wide array of advanced tactics including DNA, digital forensics, ballistics, and false confessions. Dan has also completed extensive training in DUI/OVI field work and has been qualified as an instructor in standardized field sobriety testing.

Dan’s true passion lies in trial practice. He is one of only a few in Ohio to be board certified in criminal trial law by the National Board of Trial Advocacy. He regularly lectures on trial practice and strategy, with a particular emphasis on cross examination and closing argument. Dan takes his client’s liberty to heart, and enjoys fighting for them every day.

When not in court, Dan enjoys spending time with his wife, step daughter, and twin boys. Originally from Solon, he enjoys Cleveland sports and following tOSU wrestling.

Providing a premier criminal and OVI defense throughout Ohio.