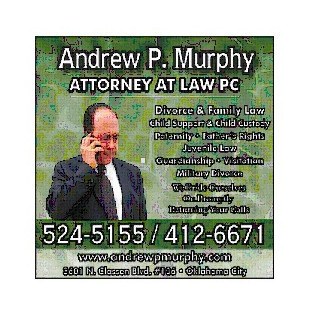 Andrew Murphy is licensed to practice law in the state of Oklahoma. He received his Juris Doctorate degree, from The Oklahoma City University School of Law, May 1995, graduating with honors.

In 1995 while still attending law school, Mr. Murphy began his career as law clerk for Israel and Israel, P.C.,

In 1997, Mr. Murphy was personally selected by Mr. Stephen Jones of Jones, Wyatt and Roberts, in Enid, Ok., as a team member for the Timothy McVeigh Defense Team. Mr. Murphy championed the legal research and writing on a number of high profile legal issues including: pre-trial detainee’s rights; live televised broadcasts of trials versus constitutional protections; and identification evidence. Additionally he helped manage, control and index more than a million pages of investigation documents.

U.S. Eadtern District of Oklahoma
Since 1995

U.S. Western District of Oklahoma
Since 1995