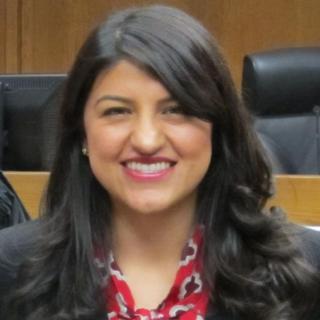 Ms. Macedo was raised in southeast Los Angeles and attended the University of California, Irvine where she received her B.A. in Political Science and Chicana/o Studies, cum laude. She interned with the Office of Congressman Xavier Becerra in Washington, DC and the William C. Velasquez Institute in Los Angeles. After college, she served in the prestigious Capital Fellows Program as a Judicial Administration Fellow at the Orange County Superior Court. She received her J.D. from the University of California, Davis School of Law in 2011. During law school she gained extensive litigation experience as an extern to the Honorable Lawrence K. Karlton of the U.S. District Court, Eastern District; former California Supreme Court Justice Cruz Reynoso; Lawyers’ Committee for Civil Rights of the SF Bay Area; Public Advocates, Inc.; the Mexican American Legal Defense and Educational Fund (MALDEF); and the Independent Civil Rights Commission in Woodland, California. After law school, she served as a law clerk to the Honorable Fernando M. Olguin of the U.S. District Court, Central District and as an Equal Justice Works AmeriCorps Legal Fellow with Central California Legal Services, Inc. Ms. Macedo is an active member of the community as a member of the Board of Directors of Central California Legal Services, Inc. a non-profit law firm providing free legal assistance to low-income families and individuals throughout the Central Valley. Ms. Macedo is also a member of the Board of Directors of the San Joaquin Chapter of the Federal Bar Association and leads Central Valley Pro Bono efforts for the Unaccompanied Minors Central Valley Collaborative. She is a member of the Fresno County Bar Association, Fresno County Women Lawyers, La Raza Lawyers Association, Consumer Attorneys of California, and the Central California Trial Lawyers Association. She is fluent in Spanish.