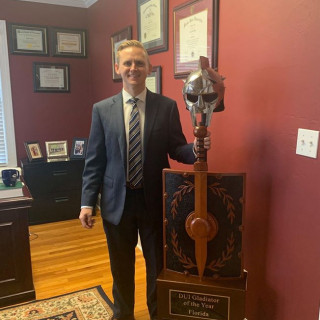 Born and raised in Florida, Aaron Wayt, focuses on defending men and women accused of DUI and other alcohol related crimes in Tallahassee. While attending law school, Aaron Wayt proved his dedication for helping those through law when he earned the Outstanding Pro Bono Service Award from Florida State University College of Law for providing over 500 hours of community service to the Leon County Public Defender’s Office. He has extended his knowledge and practice in blood and breath testing for Driving under the Influence (DUI) cases when he attended the lecture series put on by the National College for DUI Defense and the Texas Criminal Defense Lawyers Association, "Mastering Scientific Evidence." Aaron Wayt also trained on the operation of the Intoxilyzer 8000 in the same 24-hour course that law enforcement officers take and it is recognized by the National Highway Traffic Safety Administration. He's also taken a course on DUI Detection & Standardized Field Sobriety Testing taught by a former law enforcement officer. Aaron Wayt has been practicing law as a Certified Legal Intern since August of 2009. He was admitted to the Florida Bar in September 2010 and has been defending individuals accused of misdemeanor and felony crimes ever since. As a Tallahassee DUI defense lawyer at Pumphrey & Prince, Aaron Wayt has handled many DUI related cases, from first DUI to felony DUI. To schedule a free detailed consultation with Aaron Wayt, call (850) 681-7777. He will review your case and help you understand the defense options available for you.